Join us for an opening reception on Friday, July 2nd at 5 PM at the gallery. Details can be found on Facebook. 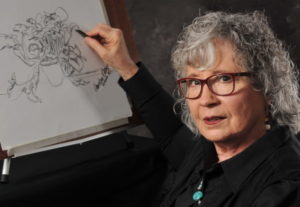 As a fourth-generation Texan, I grew up exploring Texas deserts, prairies, wetlands, and forests through visual media of all kinds. At an early age, I decided to share my discoveries of animals and environments through the visual arts. All my interpretations of Texas and the southwest seek to draw the viewer in to scenes of incredible texture, heat, and color. I was a volunteer for Texas Parks and Wildlife for over 20 years. While completing my master’s degree, I was inspired by the idea that art increases and sharpens our life experiences.

The University of Texas at Austin awarded me an art scholarship that led me to a Bachelor of Fine Arts degree. I also earned a Master of Arts degree from the University of Houston. I have worked as an art therapist in Galveston, as a secondary art teacher in Webb and Dobie Middle Schools in Austin, and at Georgetown High School, Georgetown, Texas.

My paintings, drawings, and illustrations have been shown in private collections, galleries, salons, and restaurants in Texas and throughout South America. Solo and group shows in Texas include the Bay 6 Gallery group show, “Fused Expressions”; the Inn on the Riverwalk show (San Antonio); the Texas Wax “Degrees” show (Houston); the group show “Global Swarming,” exhibited in buildings on the grounds of the State Fair of Texas (Dallas); “The Alchemy of Encaustic” in Kilgore College (Kilgore); Wax 10×10 (Amarillo); Congress Old Bakery and Emporium (Austin); encaustic shows at the Dougherty Arts Center (Austin); Round Rock Arts (Round Rock);  Red Poppy Coffee (Georgetown); and the Corridor in Downtown (Austin). I have been fortunate to exhibit watercolor and encaustic shows at the Georgetown Library. I was selected for a solo show at the main gallery, Cultural Activities Center in Temple, Texas.

I was fortunate to be selected as the “Artist in Residence” for the National Park Service, Amistad National Recreation Area, Del Rio, Texas. My solo show, “El Cielo, las Mesas y el Rio Diablo,” was a fabulous experience and a great success. For the show, I exhibited oil, acrylic, and watercolor paintings inspired by the park. I taught “plein air” painting and mixed media classes located on private ranches in the area and classroom watercolor painting for college and adult students at the Del Rio Fine Arts gallery and studio.

My first Massachusetts solo show took place at the Conant Gallery of Lawrence Academy in Groton, Mass. My paintings and drawings have been exhibited in four local art association shows: the Artist League of Lowell, the Gardner Area League of Artists, the Nashua Area Artists Association, and the Princeton Arts Society.

These paintings represent my personal observations and responses to animals that have become severely endangered, as demonstrated in Rarely Seen, inspired by the Pacific horned frog, Ceratophrys stolzmanni, and Bleeding-Heart, Gallicolumba keayi, a dove endemic to the Philippine islands. My paintings are my attempts to recognize their individual spectacular features so that any viewer will contemplate the pending loss to our unique environments. The Bend is inspired by Big Bend National Park. Earthbound and Deliberate reflect my responses to worldwide environments impacted by global warming.

Today encaustic painting refers to the use of a painting medium composed of beeswax, Damar resin, and oil pigment. Damar resin is added to raise the melting temperature of the wax and to give it hardness. This addition makes it more durable and easier to polish for a high gloss. The medium has many interpretations dating from prehistory to the present.

Altamira (Spanish for high view) is an Upper Paleolithic cave in Spain that exhibits polychrome rock cave paintings. Scientists utilizing Uranium-thorium dating techniques have estimated the paintings to be 35,000 years old. Artists used minerals with animal fat and cave water to paint the first encaustic animals on the ceiling of the cave. Altamira has earned the nickname, “the Sistine Chapel” of cave art.

Beeswax was used beginning in  the first century in Greco-Roman Egypt for mummy casings portraits to exhibit a more lifelike skin quality. The painting of the boy was painted in the 2nd century.

Diego Rivera (Mexican mural painter) traveled France and Italy in the 1920s to study murals and frescoes. He experimented with mural encaustic painting in 1922-1923 as exhibited in The Creation located in the San Ildefonso College, Mexico City, Mexico.

There are many current encaustic artists worldwide. One of the most famous artists to be challenged by the medium was Jasper Johns. He often recalled building his methods of working with encaustic paint and stated that he loved the fast drying textures and the ability to carve into the paint. The Flag  is painted in encaustic, oil paint, and collage and it is the best known of his encaustic art work. 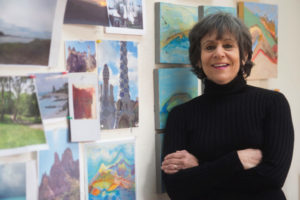 When I first flew in an airplane, I was struck by the color, shapes, and shadows created by the light from the sun. The sun influenced everything, infusing the already rich palette of the landscapes and seascapes with what felt like a supernatural light. As the plane moved, the images seemed to move as well. The shapes bounced and swayed in their own rhythmic way. This was all very exciting to me and the experience has informed my artwork ever since. Light, color, and movement are basic elements of all of my paintings.

My work has also been strongly influenced by the coastline of Massachusetts. I grew up there and have always felt tremendous happiness and excitement at the beach. Pleasure is a large part of my process and a critical part of the finished piece. My paintings are places of happiness. 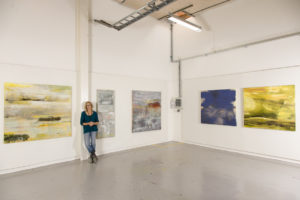 Barbara Groh is a visual artist who has immersed herself in the creative process for over four decades creating highly personal abstract works of art. Her work has been exhibited in galleries and museums and has appeared in numerous publications and collections. Groh, who holds an MFA from Vermont College of Norwich University, has shared her talents and life experiences through teaching on numerous art faculties, primarily Drawing and Painting. She has moved her primary residence and studio from the countryside in Sweden to her studio in Brooklyn, NY. The many travels between the two continents continue to inform her visual language as her sense of place, space and time are now influenced by a new home and landscape. 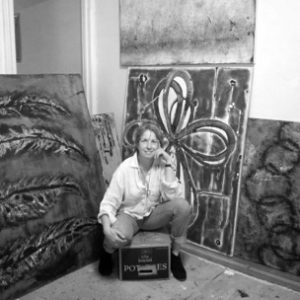 Shira Toren is an American-Israeli artist. Born in Tel-Aviv. She moved to New York City to study fine art and design. Toren received her BFA from the Pratt Institute and an Associate Degree in Art Therapy from The New School. She attended classes in Paintings and Printmaking at The Arts Student League in New York.